Gamestop settled on a lawsuit regarding the sale of used games that are missing DLC. Is this lawsuit a win for gamers or will this cause more problems for gamers? ... [read more]
Burnout Dominator Review
Posted on March 14, 2009 by OG

Burnout has always been a series that I've loved. Burnout 3: Takedown really got me into racing games again after my romp with Need For Speed: Underground 2. Burnout has always been simple; go fast, smash into rivals, get boost, repeat. It's something that works and EA has always delivered great gameplay and fun multi-player. Before Burnout's venture onto the next-gen consoles, EA decided to release one last Burnout which still used the old Burnout formula.

The game doesn't have a story, and in this type of game it's not needed as it wouldn't fit in, but it'd be cool if you actually had some objectives. The gameplay in the game is classic Burnout. You have the new Maniac mode where you are tested to drive like, a maniac. Burnout/Drift/Near Miss Challenge is another new mode. Rival and Dominator challenges round up the new modes. Older modes such as Race, Burning Lap, Road Rage, and Grand Prix return.

A missing mode, which was one of my personal favorites, is the Crash mode. This type of mode would have been perfect for on-the-go gaming. Overall, the gameplay is like previous Burnouts. You chain together crashes to get boost, these combo boosts are called Burnouts. The AI doesn't usually try to knock you out with much effort so it is slightly easy, but you're really just fighting against the clock.

Presentation is great in the game. The car models are good for the PS2 and the backgrounds show some pretty good life. Some clipping and tearing appears while playing and sometime the street will have random white lines appearing out of nowhere but it doesn't deduct from the experience. The music tracks are wonderful, as usual. The tracks fit the style of the game. A questionable decision was to include an English, Spanish, Korean, and Japanese, something like that, version of the song "Girlfriend" by Avril Lavigne.

The game is a pick up and play title so replay is almost endless. Playing with Ad-Hoc is great fun and will keep you hooking up every week or so. Infrastructure is sadly absent and it would've been a perfect addition, ah well, maybe next time.

Burnout: Dominator for the PS2 is a wonderful racing game and a must buy for arcade racing fans or fans of the series itself. Fun gameplay and multi-player fire it ahead but the missing Crash mode and online sucks. 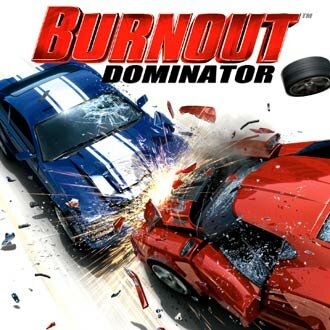