New Tomb Raider gets pushed back to beginning of 2013

The highly anticipated reboot of the Tomb Raider franchise is, sadly, going to take a little longer for it to be released.  Posted on the official Eidos Games forums, the Head of Studio at Cryst... [read more]

Gamestop settled on a lawsuit regarding the sale of used games that are missing DLC. Is this lawsuit a win for gamers or will this cause more problems for gamers? ... [read more]
Zombie Slayer Diox Review
Posted on March 19, 2012 by Eduardo

Considering how zombies have appeared to have infected nearly all game genres, I suppose that I shouldn’t be too surprised to see a rhythm game with zombies shamble onto the Nintendo 3DS eShop.  I don’t really mind, though, because it will nice to play a rhythm game on the system that isn’t Elite Beat Agents, Rhythm Heaven, or Rock Band.

Diox, which the game repeatedly explains is pronounced ‘Dio,’ is a zombie slayer in the post- Zombie Apocalypse year of 20XX.  He uses music to lure in the zombies before slashing them to bits with his samurai blade.  Makes sense, I don’t think zombies are going to be big Adele fans.  Diox is looking for a legendary guitar amp capable of wiping out thousands of zombies at a time.  Of course, said amp is guarded by about a bajillion zombies and three bosses spread out across three areas and twelve levels.

The game is very simple; as Diox walks across the screen, zombies with icons above their heads will approach him.  As they enter a circle in front of Dio, the player swipes the touch screen in the direction indicated (horizontal, vertical or diagonal) to destroy the creature.  There are three difficulty levels, in Easy only requires a swipe, but Medium difficulty requires the player to hold down a specific direction on the D-pad.   Hard difficulty also introduces swipes that have to be done in a specific direction (left to right, etc).  So, does Zombie Slayer Diox rock the house?

It Came From the Second Dimension - Despite the subject matter, Zombie Slayer Diox has a light tone and features bright colorful 2-D graphics.  While they aren’t animated quite as well as I would have liked, they get the job done.  The zombie chunks and points flying everywhere do get in the way of the icons above the zombie’s heads on occasion, but it isn’t a deal-breaker.

Original Music - As much as I want to ding Diox for not featuring any licensed tracks, the original music works well with a 70-80s hard rock vibe.  Also, the explosion of licensed music in games means that licensed tracks are probably way over budget for a smaller developer like UFO, so I’ll cut them a break here.

Not Quite on the Beat - I have been playing rhythm games for years, going all the way back to Karaoke Revolution on the Playstation 2.  The timing on Zombie Slayer Diox feels like its off just a hair, like I have to slash just a few milliseconds later than when I’m accustomed to.  Now, I am willing to concede that it may just be me, so I won’t put this point in the negative column, but it is something that I should mention.

Overly Simple Gameplay - What I won’t cut Diox a break for, though, is the bare-bones gameplay.  You slash zombies to the beat of the music, and if you have enough points at the end of the level, you win and go to the next one.  No power-ups, no bonus levels, no multiplayer, there’s nothing else here.  The game does keep track of high scores and features achievements in the form of unlockable guitar picks, but the majority of them are for getting ‘A’ or ‘S’ rankings in the levels.  Each of the twelve levels is just over three minutes long, and the entire game can be played through in just over an hour.

Uneven Difficulty - Ideally, a game should start out easy and get progressively harder as you go along, especially one based mainly on execution like a rhythm game.  Zombie Slayer Diox throws that out of the window, because the difficulty is all over the place.  I got stuck on the first boss fight for awhile and thought I was going to be in deep trouble from there on out, but instead, the game never got any harder and even got significantly easier with slower songs once I got to the last few levels.

3D is Barely There - I do not know why this game was even done in 3D in the first place, the effect is barely noticeable on the title screens, and the amount of concentration the player will be placing on the incoming zombie horde means there won’t be much time left for sightseeing.  This really should have been released as a DSi game.

Zombie Slayer Diox has its heart in the right place, but its overly simple gameplay and uneven difficulty deliver a double-barreled shotgun blast straight to its head.  It looks and sounds good, but with its simple gameplay isn’t anything compelling here beyond the whole ‘heavy metal meets zombies’ bit.  If it had more to offer in terms of its gameplay I would give it a higher score, but as it stands this game is as average and as basic as it gets.

*This review was based on the 3DS version of the game with a review code provided by the publisher.* 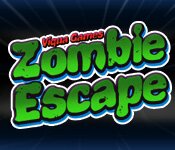