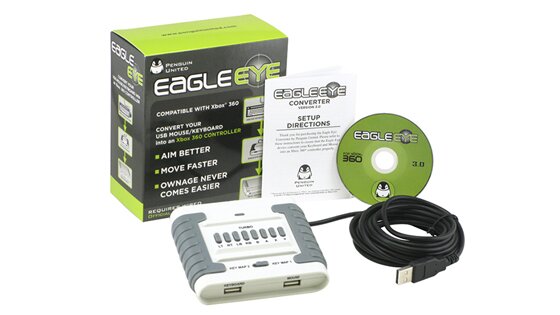 Think you can dominate console players with a keyboard and mouse? Penguin United's Eagle Eye Converter for the Xbox 360 allows you to find out, giving you the upper hand on controller users. ... [read more]

As I mentioned in my X-Men: Destiny review, I read DC Comics instead of Marvel Comics.  I know the basics of Spider-Man, having seen his various appearances over the years on Electric Company, on various cartoon shows and the recent movies.  So while I know about Uncle Ben, Aunt May, Mary Jane, and Doc Ock, I don’t have much knowledge beyond that.  “Spider-Man Edge of Time” is a game that features our friendly neighborhood Spider-Man of today and “Spider-Man 2099” from the early 90’s comic line.

Spider-Man Edge of Time is an action adventure game developed by Beenox, developer of Spider-Man Shattered Dimensions.  In the game, the two Spider-Men must work together to stop Dr. Walker Sloan, a villain from the future who travels into the past in order to rewrite history in his favor by founding Alchemax, your not-so-friendly Evil Company du jour.  Upon discovering that Spider-Man will meet his death at the hands of Anti-Venom, Spider-Man 2099 races to the past to save his predecessor.

Spectaclar Presentation - Edge of Time continues the high production values we’ve come to expect from games based on Marvel Comics properties.  The graphics are crisp, sharp, and are well-animated, featuring smooth transitions as you bash bad guys left and right.  The orchestral score by Gerard Marino, lead composer of the God of War series, suits the epic tone the game is going for, and the excellent voice acting features many actors from previous Spider-Man games, as well as Val Kilmer as Dr. Sloan.

Amazing Upgrade - XP is earned as the player defeats bad guys and finds purple XP items throughout the Alchemax building.  XP can be used to buy and upgrade moves for either of the Spider-Men, or can also upgrade moves from a set that both characters share.  Gold Spiders are also scattered throughout the levels and can also be earned by completing in-game challenges or defeating enemies.  Gold Spiders can be used to upgrade health and stamina.

Does Whatever Two Spiders Can - Despite sharing the title of Spider-Man, the original and 2099 versions are slightly different.  Our Spider-Man derives his powers from his spider-abilities and Spider-Man 2099 has more technology-based powers.  Thus, the way the game is played will be a little different depending on which Spider-Man you are using at the time.  The Spider-Men also add some personality and humor to the game; Peter Parker is on full smart-aleck mode here constantly clashing with Miguel O’Hara’s oh-my-god-the-universe-is-going-to-end seriousness.

Smash and Smash and Smash - Edge of Time is a beat-em-up, so you fight the same few enemy types over and over again.  The monotony is broken up by the occasional boss fight and segment where you free-fall down a shaft and have to dodge obstacles, but the majority of the game is beating up on Alchemax soliders and guards.

Get Out of My Head - One of the first things Spidey 2099 does after discovering Spider-Man is in trouble is establish a mental link between them, allowing the Spider-Men to communicate telepathically.  This works as a storytelling device, but the game frequently shows the other Spider-Man is doing in the lower right-hand corner of the screen, which can get distracting at times.  The constant bickering and blabbing between the two also becomes annoying.

Wall Crawling is Sick - As one would expect, Spider-Man has the ability to wall crawl in the game, and the player has to do so in certain parts.  It didn’t work quite as well as it should have, the controls would frequently remap so that I didn’t know which direction to use to move Spider-Man where I wanted to.  The camera would also swing around wildly as I maneuvered, and at one point I even had to stop playing before I hurled.

The Old Parker Luck - Just when I thought I was nearing the end of the game, something else would happen that would keep the story going.  It started to feel a little bit hackneyed and I got to the point were I just didn’t want to play the game anymore.

While a lot of care was placed into making Spider-Man Edge of Time look and sound good, in the end it is an average game made slightly more tolerable by Spider-Man himself.  The enjoyment of slugging it out as everyone’s favorite web-head is snuffed out by repetitive gameplay, distracting dialogue, and a story that hangs around just a bit too long.  Even true believers will have a difficult time slogging through this one.