Gamestop settled on a lawsuit regarding the sale of used games that are missing DLC. Is this lawsuit a win for gamers or will this cause more problems for gamers? ... [read more]
Nintendo Financial Results Briefing: Maintaining the success of the 3DS through this year
Posted on May 01, 2012 by MikeV

As it has been shown, the 3DS since its launch has been Nintendo’s main source of income through both hardware and software sales. The momentum has been strong for the most part in Japan, while the US still hasn’t made it to the expectations that Nintendo forecasted. To grow and maintain the snowball success that the 3DS is having, Iwata lays out a plan to maintain this momentum. This involves keeping the vitality of evergreen titles and seamlessly releasing new key titles.

As mentioned before in the previous article, evergreen titles are game that sell extremely well during their initial release and continue to do so years after. Again the best example of an evergreen title is New Super Mario Bros. It’s been six years since its release and it continues to be the best selling DS game. With this information Iwata and Nintendo hope to repeat this success with the 3DS games. They already have laid those foundations with two titles in the 3DS library, Super Mario 3D Land (5.84 million units) and Mario Kart 7 (5.24 million units). These two games were released to critical acclaim and have continued to sell.  With that in mind Nintendo plans to maintain their vitality in this New Year. “What does that mean?” you may be asking. I’m predicting that these two titles will be the first entries of Nintendo’s budget line brand, “Nintendo Selects”. Or Nintendo could also consider bundling either game with a 3DS or a limited edition 3DS.They have done this many times with the DS and it has been proven successful. In addition to the Mario games, three other titles have shown enough popularity through their sales that Nintendo has decided to support them as evergreen titles. These games are Monster Hunter 3G (Japan only), The Legend of Zelda: Ocarina of Time 3D and Nintendogs + Cats. These games will also possibly be included in the Nintendo Selects line or will be bundled with 3DS consoles. Two other titles that have release within the last few months that Iwata mentions are Kid Icarus: Uprising and Fire EmbleemKakusei (a Japan only title). Nintendo also hopes to drive sales for both games so that they end up as evergreen titles. But Nintendo can’t survive on evergreen titles alone. And as promised they have planned to release new games in a timely fashion.

The first of these titles is the newest entry in the Pokémon franchise, Pokémon Black 2 and White 2 for the DS. I find this kind of odd that a “traditional” Pokémon game will be appearing on the DS and not the 3DS. Whatever the reason may be, we do know for sure that the game will go on to be a high seller when they come out this autumn. The next game that is sure to be a fast seller is the New Super Mario Bros.2. A few screen shots of the game were shown off during last month’s Nintendo Direct presentation. Other than that the power leaf is making a return and the August release date, not much is known but will be revealed at E3. Iwata then briefly glosses over a couple of games that that will be releasing on the 3DS in a timely matter. Three of those game will be seeing a US release and will be at E3 this. Those games are Mario Tennis Open, Paper Mario and Luigi’s Mansion 2.

As the rest of the games that are shown in the graphic below, these will play a vital role in making sure that the 3DS will maintain its success and even increase its hold on the portable market: 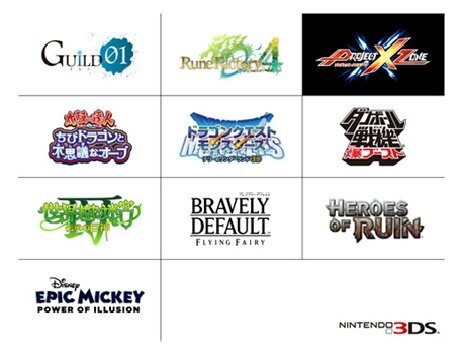 As you can see these games are from 3rd party developers from various developers. It has been known that over the years, Nintendo hasn’t had a strong relationship with 3rd party developers, especially when it comes to bringing titles overseas. These games are highly anticipated and will most likely help drive 3DS sales when each one comes out. Personally I hope that the US gets a localization of Bravely Default Flying Fairy, due to me enjoying the art style of Final Fantasy: The 4 Heroes of Light. In fact, the same team that developed 4 Heroes of Light will also be working on Bravely Default. It will be nice to play an original game from Square for a change.  Only two of the above games will be releasing the US for sure: Epic Mickey: Power of Illusion and Heroes of Ruin. As for the other games, only if Nintendo sees a high demand for the games, then they will bring them over either in physical form or digital distribution. Speaking of digital distribution, the last part of Nintendo’s financial results briefing will be looking into the company’s foray into distributing full retail titles digitally.